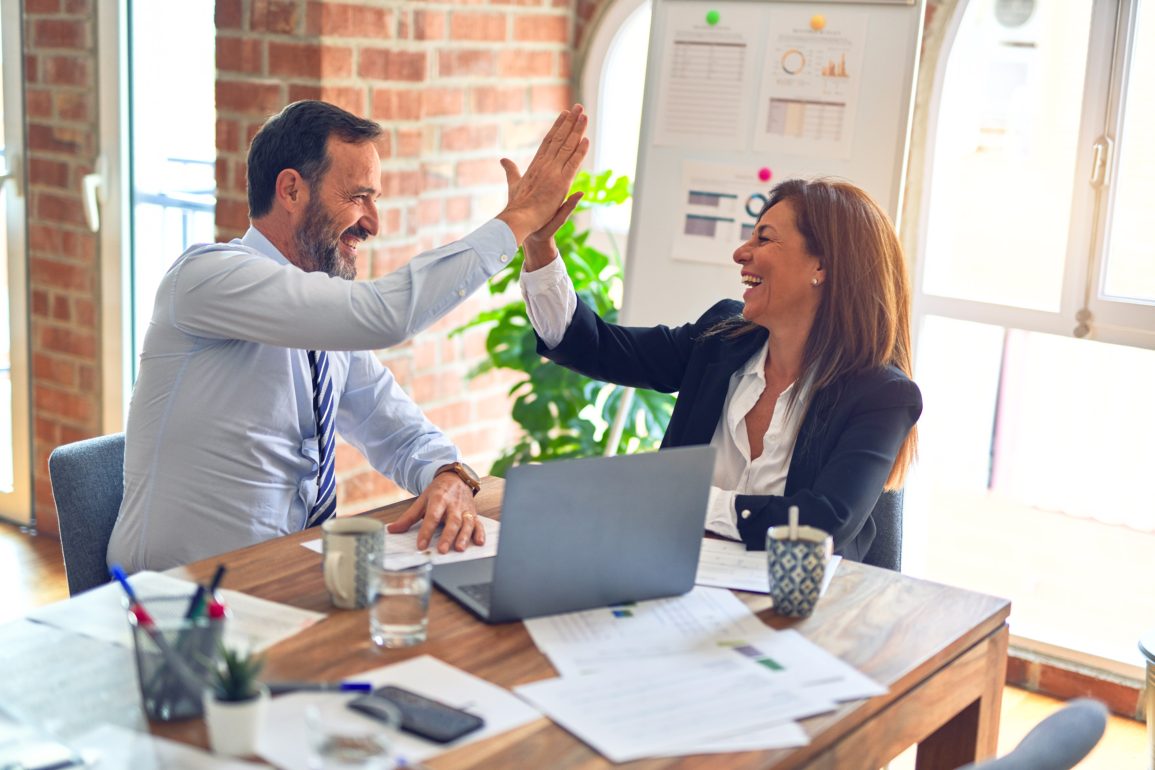 Have you ever heard any of these common decision-making frustrations?
“Our conversations just go in circles, it seems like we can never make a decision around here!”

“This is so stupid—you asked for my opinion and then ignored it. I don’t know why I even bother! From now on, I’m just going to shut my mouth and do my work.”
“We talked about so much I’m not even sure what we’re talking about. Are we making a decision or what?”

Avoid These Two Big Mistakes
We’ve both heard these words and so has nearly every manager we’ve ever worked with. We imagine you have too. This kind of frustration and anger reflects a broken process. To make more efficient decisions your team can get behind, start by avoiding these two big mistakes.

Mistake 1: Combining “Where are we going?” conversations with “How will we get there?” decisions.
Start your conversation with two vital pieces of information. 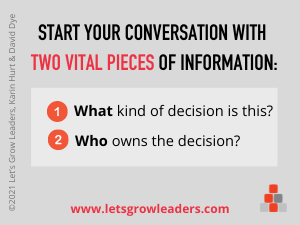 1. What kind of decision is this?
and
2. Who owns the decision?

What kind of decision is this?
The first step to making decisions that everyone gets behind is to make just one decision at a time and limit discussion to that single decision.

“Where are we going?” decisions
The first type is a decision about goals.

The question, “Where are we going?” can take many forms, but it’s always about your group’s goal, destination, or outcome.

Other ways to ask this question are, “What is the outcome we need to achieve?” or, “What does success look like?”

You can’t talk about how you’re going to do those things until you’ve first clearly decided what success looks like.

For example, say you’re looking at your employee engagement survey results and realize your front-line supervisors are feeling overwhelmed and exhausted.

Of course, you have many strategic “Where are we going?” choices you could make.

Perhaps they could use training on how to effectively and efficiently lead their remote teams.

Or, maybe you want to revisit your scheduling or time-off policies.

Another option could be to find ways to create more human connection and support through virtual water coolers and other fun.

First, make the decision on which approach you will take, and what success looks like BEFORE you start talking about what training partner to use, or best practices for time-off policies.

Know where you are going before you discuss how to get there.
“How will we get there?” decisions

The second type of decision is: “How will we get there?”
This is a decision-making discussion about methods.

For example, if the decision has been made to invest in front-line leadership training, now you can entertain the “How will we get there?” questions.

Should it be in-person or live virtual training? What competencies should we focus on? Will we include a leaders-as-teachers approach? How will we reinforce the training to ensure it’s sustainable?

Separate discussions about where you are going from how you will get there.

Managers get in trouble when they allow these discussions to get mixed up.

The team starts out talking about whether to change up schedules and then suddenly the conversation shifts to which training partner to use. And then, someone else starts talking about the need for focus groups.

The discussion is confused, perplexing, and wastes time because the question isn’t clear.

Mistake Number 2: Failure to Define Who Owns the Decision
Let’s return to the upset employee we quoted at the beginning of this article.
“This is so stupid—you asked for my opinion and then ignored it. I don’t know why I even bother! From now on, I’m just going to shut my mouth and do my work.”

If you’ve heard this or said it yourself, you’ve experienced the second decision-making mistake managers commit: lack of clarity around ownership.

People hate feeling ignored. Unfortunately, when you ask for input and appear to ignore it, employees feel frustrated, devalued, and powerless. In contrast, when you are clear about who owns the decision and how it will be made, people will readily contribute and are far more likely to own the outcome.

This isn’t difficult, because there are only four ways to make a decision:
1. A single person makes the decision.
Typically, this would be the manager or someone she appoints.
In this style, you might ask your team for input and let them know that after hearing everyone’s perspective, you will make the call.

2. A group makes the decision through a vote.
This might be a 50-percent-plus-one majority or a two-thirds majority, but in any case, it’s an agreement by vote. With this option, you ask everyone to contribute input, and they know that the decision will be made by a vote at a specific time.

4. Fate decides.
You can flip a coin, roll the dice, draw from a hat, etc. There are times where flipping a coin is the most efficient way to make a decision. When time is of the essence, the stakes are low, and pro-con lists are evenly matched, it’s often good to just pick an option and go.

For example, if you have 45 minutes for a team lunch, it doesn’t make any sense to spend 30 minutes discussing options. Narrow it down to a few places, flip a coin, and go.

Each way of deciding has advantages, but what’s most important is to be very clear about who makes the final call.

When that person said, “You asked for my opinion and then ignored it. I don’t know why I even bother!” he was under the impression that the team would decide by vote or consensus when in reality it was the leader’s decision.

This type of confusion wastes tons of precious time and energy, not to mention, leads to disengagement.

You get yourself in trouble (not to mention that it’s unfair, disempowering, and quite soulless) if you suggest a vote and then change back to “I’ll decide” when you think the vote won’t go your way.

For example, you might begin a decision-making session by saying, “Okay, I’d like to spend the next 40 minutes getting everyone’s input, and then I’ll make the call.” Or, you might describe the decision to be made and say, “We’re not going to move forward until everyone can live with it.”

You might even combine methods and say, “We will discuss this topic for 30 minutes. If we can come to a consensus by then, that would be great. If not, we’ll give it another 15 minutes. After that, if we don’t have consensus, I’ll take a final round of feedback and I’ll choose, or we’ll vote.”

You save yourself grief, misunderstanding, and hurt feelings when everyone knows upfront how the decision will be made.

You also empower your people to be more influential because when they know who owns the decision, they also know how to share their information.

Your turn. What are your best practices for better decision-making?