Are You Risking Enough Failure? How To ‘Fail Forward’ And Succeed Faster

Let’s face it, no one likes to fail. It hurts. And not just our back pocket. It’s our pride that often takes the biggest hit.  Little wonder so many people work very hard to avoid it.

Yet do a little research on anyone who’s accomplished anything and you’ll soon discover, they failed. Multiple times. They just never let it stop them or define them.

After all, if you dissect what it means to fail into its two most basic components.

Based on best thinking at set point in time, person elects to take action A to produce desired outcome B.

Action A does not produce outcome B.

Yet how often do we add in a whole lot more meaning, interpreting our failure to mean a personal and permanent deficiency on our part? A lot.  Which is why shifting our relationship to failure is paramount to enabling people to take the risks required to discover better ways of advancing or adding value.  If you spend your life running away from any risk of failure you will never have a chance of discovering all that you are capable of achieving. So to help you risk more of the failures that your success is riding on, here’s my top five tips for failing fast, and forward, while feeling good about yourself in the process.

Too often people conflate the outcome of failure with their own identity as a person. But here’s the deal:  failure is an event, not a person. So you tried something and it didn’t produce the result you wanted. That doesn’t mean you are a failure. It just means you took an action based on the best thinking you had at the time, and it didn’t lead to the outcome you planned on. No more, no less.

Distinguishing your results from your innate worthiness as a human being liberates your energy,  otherwise wasted on self-recrimination, to extract optimal learning and sharpen future decision-making. What did you do or fail to do that produced the result? What could you have done differently that may have avoided this outcome, or perhaps just better mitigated the risk?  Take the learning. Move on.

So you failed this time, in this situation, at this point along your life’s long learning curve.  This does not mean you should bury all your aspirations and resign to the couch.  It just means that on this occasion whatever actions you took did not generate the results you wanted.  Again, take the learning.

On recounting Virgin’s launch into the US soft-drink market, Richard Branson recalls how they thought that driving an armored tank around Manhattan, smashing through a wall of Coke cans in a highly engineered publicity stunt to declare war on Coca Cola was a great idea…at the time. Looking back though, not so much. “It was possibly one of the biggest mistakes we ever made,” Branson has shared. “After later analysis, we determined that we were woefully underprepared for Coke’s response.” He said their analysis also highlighted how they’d broken one of Virgin’s cardinal rules… to offer something distinctly unique. However, as Branson has said many times, including during our interview on Necker Island, it’s vital to “pick yourself up, retrace your steps, look at what went wrong, and learn from your mistakes so you can avoid making the same errors next time.”

Note the word ‘next.’ As I share in the video above, recounting my conversation with Branson: Failure is never final, it’s not personal and it’s not permanent.  It’s a temporary state so don’t treat it otherwise, Rather, get to work extracting every dollop of learning and then look for the next opportunity to apply it.

In the book Growth Mindset, Carol Dweck talks about the value of learning by trial and error.  If we don’t give ourselves permission to take ‘miss-steps’ as we go along toward our goals, we miss out on invaluable opportunities to learn about what works (and what doesn’t!), to finesse our skills, hone our strengths and fine tune our approach. We may still living by candlelight had Edison not persisted through many trials and errors. As Antarctic expedition leader Rachael Robertson shared with me on my Live Brave Podcast recounting her time in Antarctica, “As we go through life, learning about what doesn’t work is every bit as valuable as learning about what does.Often more so.”

There’s a saying that goes, if you’re in a hole, stop digging. We’re all wired with what psychologists call ‘sunk cost bias.’  That is, the tendency to continue investing in a losing proposition because of what we’ve already put into it – time, money, reputation, political capital.  If you have an expensive, ill fitting, item of clothing hanging in your wardrobe which you can’t bring yourself to throw out because of what you paid for it, you’ve fallen prey to sunk cost bias. So too if you ever stuck to a losing strategy or stayed in a relationship or job or business far longer than served you.

Likewise, if you’re currently continuing down a path of action and that’s not producing the outcome you wanted, ask yourself if doing more of what is already not working ever will?  Calling it quits can be painful but putting it off and pressing on in the hopes of a miracle can be exponentially more so. Having the courage to risk failure must be coupled with the courage to fail fast.

My last word – never stop risking failure.  A year or two back I had the opportunity to interview Bill Marriott Jr, chairman of Marriott International.  Marriott was well into his 80s when Marriott International made their $13 billion acquisition of Starwood Hotels & Resorts, bringing together its Marriott, Courtyard and Ritz Carlton brands with Starwood’s Sheraton, Westin, W and St. Regis properties in 2016.  As Marriott shared with me during our ‘fireside’ chat at Marriott’s Maryland headquarters at the time, “ It’s easy to rest on your laurels but you’ve got to continue risking failure. Failure may not be final, but nor is success.”

The more successful people become the less inclined they are to risk losing what they’ve gained – a ‘winners’ reputation, position, power, status, money. But as John Kennedy once observed, there is a risk to any course of action, but there is a risk to inaction.  In other words, if you’re not continually challenging yourself to grow and stretching the limits of what you’ve done before, your future horizons will gradually shrink. Playing it safe can feel safe at the time but over time, it can be the ultimate high risk strategy.

If you were going to give yourself permission to fail in the week ahead, what would you do?

More so, what are you putting at risk if you don’t?

Margie Warrell is a bestselling author, keynote speaker & host of the Live Brave Podcast. Connect on Linked In, Twitter & Facebook. 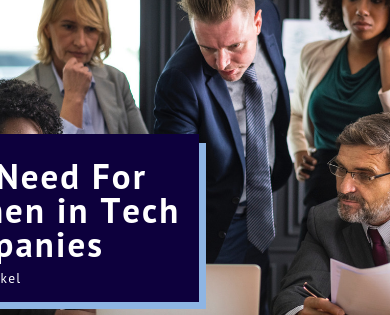 The Need for Women in Tech Companies
We use cookies on our site to give you the best experience possible. By continuing to browse the site, you agree to this use. For more information on how we use cookies, see our Privacy Policy
Continue