Do You Want To Command Respect?

The first sale is always to yourself.   You must respect yourself in order to command respect from other people.

“Is the answer to my question in the materials they distributed or explained in a prior meeting?”

“I don’t think I have as much experience as they think I do, I better not state my idea with conviction –  this way I have an out if my recommendations don’t turn out to be right.”

That’s what Michael told me was on his mind when he decided not to speak up in the meeting with his boss, his colleagues, and their prospects.

If I asked him what he really wanted, my bet is he would have said he wants “respect”.  We ALL want that.  Respect is an evaluation of your value in the eyes of decision makers.  It gets you a seat at the table and it makes people want to do business with you.  You work hard, and deserve it.

Yet many of us are going about getting it in the wrong order.  We are trying to get other people to give it to us.  And once we have a little of it from others, we are hoping to not lose any of it by opening up our mouth to speak.   And that’s what rules our decisions about what to say – or not.

Hint:  Respect follows the same logic as that #1 rule of sales:  The first sale is always to yourself.   You must respect yourself in order to command respect from other people.

When you are having the inner debate about whether to speak up, you are too ‘in your head’.  You’re not fully engaged. You can’t think deeply or quickly while running the tapes of worry in the background of your mind.

By not speaking up you are trying not to lose. Yet, who engaged our hearts and won our deepest respect in London last month?  The Olympians who played to win.

[I would like to note that in the current economic environment, I hear people are more concerned how they are evaluated by decision makers. That is understandable, be on the lookout for an upcoming video in which I give you tips to address this issue.]

Do you want to command more respect?

Michael’s level of self respect started out as a 5 on a scale of 1-10.  Three weeks into our work together he was already at an 8, and his colleagues had already offered nods of appreciation about his contributions to meetings.  How did I help Michael command more respect?

Strategy #1: Prepare talking points before you go into a meeting
We expect ourselves to be able to say the perfect thing while thinking on our feet.  Easy does it on the expectations there, my friend.  You want to separate out the two parts of ‘thinking well on your feet’: preparing your points and saying your thoughts at the right time in the right way.   When you see other people talk ‘off the cuff’ in meetings (and then compare yourself unfavorably to them), you are assuming they haven’t put in preparation time.   Don’t come in unprepared and then conclude you aren’t smart enough.

Come into meetings with bullets of key issues, questions to ask, information you could supply.  Try to question assumptions, consider alternative points of view, draw from your experiences.  Take time to ‘connect the dots’ on discussions you’ve been hearing and summarize takeaways.

If it’s a networking event, put in the time to describe your services with passion and craft a concise client story that would be personally relevant to the event attendees.  Do your homework to connect what you do with current events or come up with statistics that intrigue other people to ask more about what you do.

Don’t give yourself the ‘too big’ task of figuring out what to say as well as when to say it.  Give yourself prep time to come up with ideas that will even make you think you are smart!

Strategy #2:  “Embody” being a person who commands respect
Do you remember in my blog from last week I told you the story about how I wobbled back and forth on my water ski until a picture in my mind came into sharp clarity – a picture of who I wanted to be?  As soon as I put my attention on wanting to be “Her” (that carefree, strong person who enjoyed water skiing), then I lifted myself out of the stress of “I can” vs “I can’t.”  Holding myself up strong in the water became effortless.

Michael did the same thing in meetings, and so can you.  He leaned into the meetings, made deeper eye contact.  He took his attention off of what his boss might think, and he tracked what the firm’s prospects might be thinking and feeling – and how he could help them come to a decision that would fulfill the purpose of the meeting.  He respected himself more.

You can do this too. Come into your meetings with an articulation of who you want to be in the meeting.  And then become that person.  In fact, try that now.  Try to become that kind of person right now, even as you are reading this blog…

Notice what you did.  Did you change your posture?  Did you call an image to mind? Did you say something different to yourself? All 3?

Whatever worked for you right now to “embody” the person you want to be can work for you in a meeting as well.  Try it! 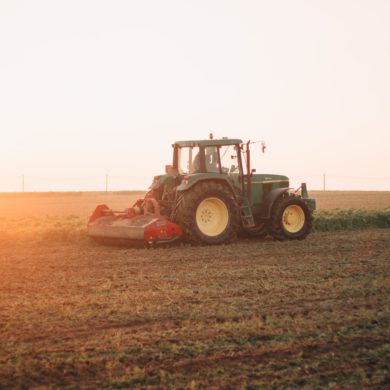 Why The Agricultural Industry Needs Help Post-Pandemic
We use cookies on our site to give you the best experience possible. By continuing to browse the site, you agree to this use. For more information on how we use cookies, see our Privacy Policy
Continue