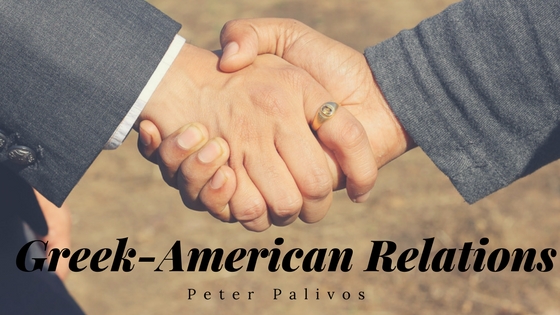 As a Greek-American living in the United States, I am proud of the strong bilateral relationship our country has with Greece. It’s important to me that we continue to advance the strength and bonds between our two countries.

Hellenism has brought ideas such as democracy, medicine, theater, and the Olympic Games to Western Civilization. The United States is a leader of the free world, the protector of democracy, and a great supporter of medical research, theater, and sports. As a Hellene, I am proud of my connection to both nations. Also, I strive for excellence just as it was taught by the great Hellenic philosophers, Aristotle, Plato, and Socrates. This goal pushes me to always improve myself as a citizen and person.

Many people today do not know the history between Greece and America. When you lack the knowledge of this long-standing narrative, it’s difficult to understand the tremendous nexus that exists between the two nations and their populations. I’ve worked alongside several United States Presidents and Prime Ministers of Greece to help these leaders honor, remember, and improve the strong historical ties we have with each other.

In the early 1990’s, I was honored to be a part of an important historic agreement between the United States and Greece. When the nation of Yugoslavia disintegrated, numerous independent nations were formed, including a nation, located directly to the north of Greece, that wanted to be recognized as “Macedonia.” Hellenes all over the world objected to this name usage because Macedonia is historically the northern region of Greece and the people living in Northern Greece have been called Hellenic Macedonians for thousands of years.

To make matters worse, this new nation began to advance false facts. They claimed that Alexander the Great was not a Hellene but instead a Slavic leader. In fact, Alexander the Great was a Hellene. He was born and raised in the Greek region of Macedonia. His teacher was the great Greek philosopher Aristotle. He spoke Greek. He was raised in the Greek culture. He prayed to the then-Greek mythological Gods. His family had participated in the ancient Olympic Games, which were then limited to only Helenes. His goal in life was to unite the Greeks so they could conquer the world and unite it under Hellenism.

The spreading of this terrible and false information that Alexander the Great was not Hellene but a Slav who was born in a Slavic country greatly upset me, so I began to take action. I called my friends in Washington D.C., including former President Bill Clinton and US Senator Carol Moseley-Braun of Illinois, and asked them to block the US Senate’s recognition of “Macedonia.” If the United States had recognized this new nation as “Macedonia,” it would have caused geographical confusion and advanced historic falsehoods.

Following my request, US Senator Braun stood on the floor of the US Senate, and with the consent of President Clinton, successfully blocked the recognition of “Macedonia” by the US Government. After failing to be recognized by the United States as “Macedonia,” the newly formed country was recognized as the FYRM (Former Yugoslavian Republic of Macedonia). FYRM is the official name of this country to this day.

For my efforts on the Macedonian issue, I was given an honor by former Greek Foreign Minister Pangalos and subsequently presented as the guest of honor at a dinner hosted by former Greek Prime Minister Mitsotakis.

In July 2015, Greece was threatened with expulsion from the European Union over the debt crisis. Such an event would have been catastrophic for Greece, the United States and the European Union. Therefore. I worked closely with former U.S. President Obama, Secretary of State Hillary Clinton, and US Senator Reid to place pressure on Germany to find a fair resolution with Greece instead of expelling the country from the European Union. Again, my efforts were fruitful because Germany and Greece worked together to reach an agreement.

I want America to never forget that Greece has been one of our most loyal allies for the past few centuries. Greece fought alongside the Americans in World War I, World War II, the Korean War, the Cold War, and even the War on Terror. Moreover, over 2 Million Greek-Americans live in the United States, and these citizens have made tremendous contributions to business, law, medicine, sports and the arts. Therefore, it is in the best interests of the United States and Greece to continue this special bond of friendship in the future centuries.

The opinions expressed here by Vunela Contributors are their own, not those of Vunela. Learn more or join us as a community member!

This article was originally posted on PeterPalivos.net