“Willpower is likely the most important keystone habit there is. Willpower has more of an impact on individual success than intelligence, talent or education level.”

“Willpower is likely the most important keystone habit there is. Willpower has more of an impact on individual success than intelligence, talent or education level.” — P. James Holland, The Power of Habit

Do you have strong willpower when it matters most? Every human endeavour requires willpower, from the moment we wake until we retire to bed in the evening. Willpower is the distinguishable characteristic many strive to command, yet slips from our hands, like clutching at water. Willpower demands our attention and tests our resolve when we least expect it. If we want to improve our health, willpower tries our commitment if we pass by the confectionery section at the supermarket. Some people claim they have little willpower when in fact they don’t understand how to use it effectively.

Popularised in the late 60’s and early 70’s, the Marshmallow test was conducted by American psychologist Walter Mischel at Stanford University’s Bing Nursery School using four-year-old children. Acknowledged as Emotional Intelligence (EQ), the test sought to gauge children’s capacity to delay gratification. Mischel claimed the results can accurately predict the children’s success later in life. These include: higher SAT scores, lower levels of substance abuse, lower likelihood of obesity, better response to stress and enhanced social skills, as reported by their parents. Despite people’s perception, willpower can be gained. The mind can direct its focus on any task given the stimuli is held in the person’s awareness long enough.

Willpower is called upon to make decisions in everyday life and sure enough, it gets used up well before we know it. We can react by being hard on ourselves for giving in to the task we are trying so hard to control. Have you experienced this, feeling regretful for something you did despite your best intentions? I know I have on many occasions. Willpower is dependent on timing and bringing a full tank of it to the task at hand. Because, if we have used it up on something prior, we can expect to have little of it in the next instance. I consider the mind a chariot, tethered to wild horses ready to gallop at a moment’s notice. As the commander, it’s our mission to direct our mental energy on the task at hand. Inner strength results in developing this mental resiliency.

In the study, The Physiology of Willpower: Linking Blood Glucose to Self-Control, it is shown a drop in blood sugar leads to a loss of willpower. This is because the brain needs high levels of glucose to exert self-control. When blood sugar runs low, the brain can’t spend the energy to override impulses. I enjoy authors Gary Keller and Jay Papasan’s perspective on how willpower gets used up throughout our day: “Think of willpower like the power bar on your cell phone. Every morning you start out with a full charge. As the day goes on, every time you draw on it you’re using it up. So as your green bar shrinks, so does your resolve, and when it eventually goes red, you’re done.”

Willpower Is A Habit

“Willpower is the key to success. Successful people strive no matter what they feel by applying their will to overcome apathy, doubt or fear.” — Dan Millman

Consequently, delaying gratification calls us to exercise willpower which many of us do every day with food choices. It’s no wonder when tired, we are most vulnerable because the brain’s glucose resources are depleted. These are those times in the afternoon when we make less than optimal nutritional choices because we’re: tired, hungry or angry. Does this happen to you? because it is certainly something I can identify with. Awareness is important for harnessing willpower since we are prone to slip into subconscious states when pressed to make difficult decisions. A subconscious state is one devoid of conscious control or intent. It’s as though we’re on autopilot instead of directing our attention to the task at hand.

A prime example alluded to earlier is when one goes shopping. Despite not intending to buy junk food, we find our shopping trolley filled with ice-cream and non-essential food items even though we’re on a strict health regime. Focus and attention are important when harnessing willpower. The ability to focus our attention on a task is vital. Yet, we want to be mindful not to overindulge since we may be inclined to use it up. For this reason, we mustn’t keep ourselves in a constant state of willpower depletion. The former president of the United States Barrack Obama wore the same suit every day, because he didn’t want to deplete his willpower making choices on what to wear or what to eat. Vital decision-making is best left for more pressing matters.

Author of The Power Of Habit Charles Duhigg believes willpower is a muscle we must continually exercise, yet not over-engage it: “Willpower isn’t just a skill. It’s a muscle, like the muscles in your arms or legs, and it gets tired as it works harder, so there’s less power left over for other things.” To overcome this restriction, we can develop strong habits to lean on when our willpower is low or exhausted. Sound habits are automatic resting points to fall back on. When we’re most tired, hungry, anxious, thirsty or uncomfortable, knowing we can shift to automatic behaviours to help us navigate a drop in willpower. Similarly, meditation or self-reflective activity is helpful in calming the mind during anxious periods when willpower is called upon. Meditation activates the parasympathetic nervous system which helps calm the body and mind during tense periods.

Author Charles Duhigg reminds us once more: “THE GOLDEN RULE OF HABIT CHANGE: You Can’t Extinguish a Bad Habit, You Can Only Change It.” This gives us a clue why many of our well-intended actions fail: we’re trying to stop an old behaviour, like snacking on junk food late at night instead of replacing the habit with a new behaviour, like snacking on fruit instead. For willpower to be a source inner strength, we must expect it ahead of time.“This is how willpower becomes a habit: by choosing a certain behaviour ahead of time, and then following that routine when an inflection point arrives,” states Charles Duhigg.

Despite people’s beliefs, the more we use willpower in the right setting, the more of it we have to use when it matters most. Finally, we mustn’t be hard on ourselves when we slip up. Like any new habit, there’s a period of learning and growth at the beginning until we master the skill. In no time, we will have gained inner strength and the willpower to overcome any obstacle life presents us with. 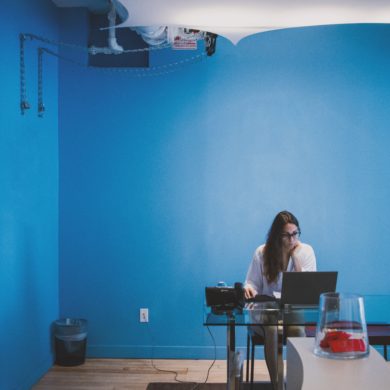 Do you Have Grit?
We use cookies on our site to give you the best experience possible. By continuing to browse the site, you agree to this use. For more information on how we use cookies, see our Privacy Policy
Continue