How to Have Friends at Work When You’re the Boss

Having friends when you’re the boss can be complicated.

Girish* is a client of mine who runs a 500-million-dollar business. He gets stellar reviews and is seen as a high potential successor to the CEO.

But he has a friend problem.

Several of his direct reports are close friends and he doesn’t hold them accountable in the same way he does his other direct reports. Often, they don’t do what he asks. And they aren’t delivering the results he expects. It’s hurting his business and his reputation.

When I speak with others on his team about the situation, they see it clearly and resent Girish’s friends. They don’t understand why Girish allows his friends to take advantage of him. And they feel demotivated and disengaged by Girish’s apparent unfairness.

But when I speak with Girish about it, he doesn’t see it at all. He’s filled with empathy for his friends’ struggles, which makes perfect sense since he cares deeply about them. But he’s blind to the damage they’re doing to him and the company.

There’s plenty of research supporting the idea that having friends at work makes you happier and more engaged. But here’s what the research doesn’t address: friendships at work are tricky, especially when you’re the boss.

So tricky, in fact, that many senior leaders avoid them.

Take Bill, who is also a client and the CEO of a highly successful, fast growing billion-dollar company. Like Girish, he gets stellar reviews from the board and his direct reports. But when people offer criticism, a single element comes up consistently; “I’d like to be closer to him.”

His response? “I’m not interested in having friends at work.”

It’s not that Bill is anti-social. He’s actually warm, gregarious, and authentic. It’s just that he’s learned, the hard way, that having friends when you’re the boss can be complicated.

“I used to have close friends at work,” he told me, “people who would come to my house for dinner with my family. But then I had to make hard calls for the good of the business, including firing one of them, and it became too painful – for me, for my family. And I became hesitant to make decisions because of it. So no, I’m not looking for friends at work.”

Girish has friends who hurt his leadership and Bill chooses not to have friends to protect his leadership. Is there a good way to pursue friendships at the top?

I’ve come up with four rules to help senior leaders maintain their leadership and their friendships at the same time:

1. Have a clear and super-strong commitment to your business objectives. You have to care enough about what you want to achieve that you are willing to make hard decisions in alignment with your purpose. You need to be open, transparent, upfront, and passionate about that commitment, while knowing that some people, probably friends, will disagree with you.

2. Be comfortable with strong emotions. This includes your own emotions and those of others. If you act on your commitment to the business with integrity, you will make people around you angry at times. They might resent you, withdraw, or get passive-aggressive. However callous this sounds, that’s not your problem to fix. You should be compassionate – you can listen, empathize, and support them – but you can’t be so dependent on the way they feel that you don’t lead your organization the way you need to.

3. Develop your friendship skills. If you’re going to drive your business with passion while experiencing a swirl of emotions, you need to master the skills that will enable you to maintain friendships in the face of disagreement and manage your dual roles of friend and business leader. These skills include unwavering integrity, empathic listening, clear speaking, and strong boundaries.

4. Be prepared to lose the friendship. Recognizing that you can’t ultimately control what happens to the friendship is critical to maintaining it. Even if you have clarity about your role as a leader, emotional mastery, and friendship skills, the other person may not be able to live with your decisions. If that’s the case, you need to be able to feel the sadness and move on. One thing that can help is to have a lot of friends. It’s not that friends are replaceable, but having enough friends will help you absorb the shock of losing one who can’t handle your decisions.

These rules are hard to follow. The critical skill underlying all of them is emotional courage – the willingness to act powerfully in the face of deep emotion. It’s what I believe is the secret ingredient to all great leadership. And it takes real practice.

But it’s worth the work.

Following these rules won’t just help you navigate the complexity of friendships at work. It will help you become a more capable leader overall.

Girish’s “aha” moment started with Rule #1, when he wholly committed to his business results. We evaluated the shortfall and he was able to see that his friends were more focused on themselves than the business and they weren’t doing the job he had been asking them to do. He knew they were capable, but realized they were being resistant.

Rule # 2 brought emotional challenges, as he initiated hard conversations with his friends. He told them he felt taken advantage of and clearly articulated his expectations of them. Throughout the process, he and I worked on Rule #3, developing his friendship skills, and he did a good job being present but firm in all his conversations.

The real test came with Rule #4: Ultimately he had to fire one leader. But the friendship – at least so far – seems intact and his other friends seem to be stepping up. The improved morale of the larger team is palpable.

And Bill? His challenge is different. He never had issues with Rule #1. His stumbling block was Rule # 2 — he was avoiding the hard emotions by not having friends at all. But now he’s taking more risks, getting more personal, and enjoying his colleagues more fully. He already has strong friendship skills, Rule #3, though now he’s exercising them more and getting even better at them.

Rule #4 is the scary part for him. He doesn’t like the idea of losing friends and he’s unwilling to weaken his leadership to keep them. But, recently, after a nice dinner with one of his direct reports, he came to me with the following insight:

Having friends outweighs the risk of losing them.

* Names and some details have been changed 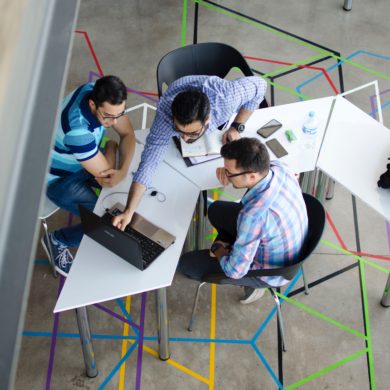 Positive Leaders: 7 Traits of Emotional Intelligence They Practice Daily
We use cookies on our site to give you the best experience possible. By continuing to browse the site, you agree to this use. For more information on how we use cookies, see our Privacy Policy
Continue