What’s the single biggest problem smaller businesses have when marketing their product or service?

What’s the single biggest problem smaller businesses have when marketing their product or service?

The biggest problem, as I see it, is the result of the combination of two separate issues:

The root cause of both these issues lies in the level of emotional involvement of the people within the business.

In many cases, this is a good thing. Having an obvious passion and enthusiasm for the product being sold consciously and subconsciously impacts every part of the business. From a marketing standpoint, when customers feel the authenticity around how you sell the product they’re more likely to include you in their buying decision. However the whole thing breaks down when people allow their biased emotions cloud how the product — and the business as a whole — is actually perceived by customers.

Before you can seriously improve your marketing, you need to ensure the business itself is up to scratch. To misquote David Ogilvy, marketing is what you’re obliged to do when you don’t have a great product.

Yes, the product may be a little rough around the edges. But what people fail to see is how hard it was to for us to make it. OK, sometimes we don’t answer emails particularly promptly. But most customers don’t understand the difficulties in building a factory, or setting-up an organization.

The cold hard fact is, more often that not, you wouldn’t be selling it if you weren’t being paid to sell it. You wouldn’t be talking about it, marketing it, or advertising it. If it wasn’t for the fact you worked there, you probably wouldn’t buy it.

The result is marketing that shouts, rather than informs, using old-fashioned tricks and tactics that haven’t worked in years. Marketing has changed, but the general understanding of what’s now required hasn’t kept pace.

For hundreds of years, having a less-than-perfect product that’s not particularly well marketed didn’t necessarily mean going out of business. There’s no cast-iron Darwinian Theory to suggest that bad businesses all eventually go under, any more than businesses that ‘do things right’ (whatever that is) have a guaranteed path to success.

There are plenty of (usually) small businesses ticking over just fine. Sure, the product could be improved in a number of ways. Yes, due to the internet we’re steadily losing sales we’d have won in the past. But sales are still coming in and bills are still being paid.

However, complacency is the refuge of the mediocre. Sales may well be bouncing off your break-even point today. But you know it’s just a matter of time before new customers voice their misgivings with the idiosyncrasies that existing customers have put up with. Once the tide has turned, it’s often too late.

So the first thing you’ve got to do is make things better.

Skipping Over The Hard Stuff

But what is ‘better’? That depends on you.

Better doesn’t (have) to mean Six Sigma quality, because we’ve already got that. Better can look like a lot of things. Maybe it’s fixing the product. Or maybe it’s improving the presentation. It could be an incremental change — a feature, size, color, or pricing. Or perhaps it’s how you do business.

Getting clear about what your own ‘better’ looks like is often the single hardest part of marketing. As a result, it’s the part that everyone wants to skip over.

Instead of looking inward, marketers and business owners want to look outward. They want to have a new tagline, a new website, or new brand livery. They want an email newsletter, PPC ad campaigns, or an explainer video.

But the reality is a new corporate or product tagline isn’t the answer to your problem. Neither is crafting an elevator pitch, designing a brand new whiz-bang website, or spending a fortune on digital advertising, martech, AI, VR, or whatever other shiny new thing is preoccupying people’s attention this week.

Before you can determine whether any of that stuff is important, you need to work out what your own, personal, unique, ‘better’ looks like. Hiding behind tactics and tools — only to blame them when things don’t work out — wastes time and resources. Ultimately it simply serves to delay facing up to the bigger questions that need to be answered.

Being The Change You Want To Happen

As marketers, business owners, or salespeople, we’re all in the business of change. But change is hard. As human beings we’re wired to avoid the prospect of change whenever we can.

As the same time, the biggest ideas in business history only reached significance because of people accepting, and ultimately embracing, change. Automobiles, television, and internet shopping all took years to catch on, as consumers eventually rejected the status quo.

At its most fundamental, marketing is about effecting change. Changes in values, aspirations, or habits. It could be argued that you haven’t made an impact on anyone until you’ve changed them in some way. Marketing is about helping someone solve a problem, changing their perception / attitude / culture / behavior for the better.

The challenge is educating, informing and/or entertaining your audience with a marketing story designed to effect that change. To be perceived as the change you want to happen. To create messaging that resonates, that tells people something they’ve been waiting to hear and are open to believing.

To take them to a place where a change may happen, that solves a problem, and delivers on its promise. 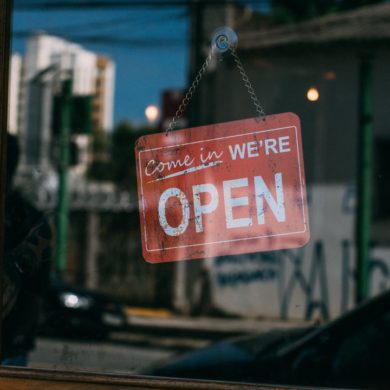 The 5 Questions You Must Ask Yourself Before Starting a Business
We use cookies on our site to give you the best experience possible. By continuing to browse the site, you agree to this use. For more information on how we use cookies, see our Privacy Policy
Continue