Is Charisma in the Eye of the Beholder?

Although many people have a hard time defining charisma, they believe they know it when they see it.  Most will agree that certain historical leaders (Presidents Kennedy, FDR, Ronald Reagan, and leaders of social movements, Martin Luther King, Jr., Gandhi) and celebrities (Oprah Winfrey, Elvis Presley) have charisma, but when it comes to the specific political leader that people support, charisma may be in the eye of the beholder.

Consider leaders of religious cults – Jim Jones, David Koresh. Their followers are convinced of their charisma, and affected by it. Outsiders would not consider them charismatic, and might see them instead as slick, phony, and manipulative.

To a great extent, charisma is in the eye of the beholder, or more precisely, in the eyes of the followers. Charismatic leadership, as theorized by sociologist, Max Weber, was primarily in the relationship between leader and followers. According to Weber, certain followers are drawn to a particular leader and imbue that individual with charisma. An emotional bond forms between leaders and followers, and as long as the followers are happy with their chosen, charismatic leader, all is well, and they are willing follow. But that bond can be broken if the leader fails greatly (consider the case of Benito Mussolini).

One thing is certain, however. In order to be considered charismatic an individual has to have the ability to connect with and “captivate” followers. Not all people will be affected, however, only those who are drawn to, and have positive feelings for, the leader. A large part of that involves the ability of the leader to convey emotions to the followers – to stir their feelings and create an emotional bond. Also important is the message the charismatic leader communicates to followers – is it a message that resonates to the followers?

So what is the common element that underlies charisma potential? It seems to be the ability to communicate both emotionally and verbally to others – to be able to inspire them with words and with emotions communicated nonverbally. However, skilled communication alone will not lead to charismatic leadership without the willing receptivity of particular followers. 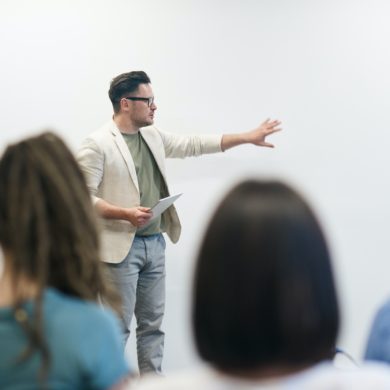 3 Things Introverts Can Do To Ease Your Public Speaking Nerves
We use cookies on our site to give you the best experience possible. By continuing to browse the site, you agree to this use. For more information on how we use cookies, see our Privacy Policy
Continue