It’s Not All On Us – It’s On All Of Us: The Flip Side of Female Empowerment 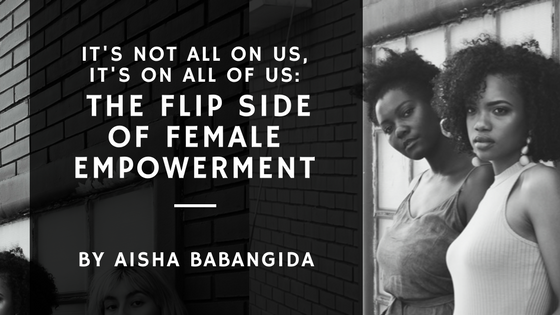 Feminism. The gender gap. Female empowerment. All these concepts have become buzzworthy phrases in the last few years, so much so that while we answered some of the more general problems and questions surrounding them, we evaded the more pressing or vague problems associated with them.

In putting the onus on women, we lose sight of the fact that while women need to advocate for themselves in order to level the playing field, they don’t need to do it all. As Tamara Schwarting asks, “But, in an age where women are capable of doing anything and everything, does that mean we need to do everything?” Men and women alike, we all need to contribute to the mission and the ultimate solution.

While women are driven (at times to a fault) by the need for self-actualization, is it fair to hold them to this high standard? Should we hold ourselves to this higher standard? Of course we want to. Who doesn’t want to be a superhero? The bigger problem now is resizing/rightsizing our goals and expectations for ourselves and the women around to become feasible.

Rather than spending so much time zeroed in on an idyllic and balanced world, we may need to hear the questions posed to us as well. Your idea of female empowerment may not be the same as your neighbor’s. That’s okay too, but in order to satisfy the majority, we need to be researched, receptive to new ideas and most importantly realistic. Last year International Women’s Day in the United States became a cry for reform directed at their government and how they handle issues in the country. Many thought this would become more riot-like rather than productive, but based on Marisa Kabas’s article and many others’ it appeared to be quite the opposite. Instead, it became a point to come together and support each other in their differing yet equally important needs and goals.

In a few days, I am hosting an event in Abuja to commemorate this year’s International Women’s Day. I look forward to engaging on the long-term issues surrounding women and evolving our understanding of the empowered woman as it pertains to sustainable business and social enterprise. While I hope to inspire and educate attendees on the potential and possibilities within these sectors, I also hope to start important conversations around these subjects that continue long past March 8th. Time’s are changing, and I hope you will join me in these lasting engagements not just on International Women’s day, but every day, as we strive to evolve not Nigeria, but the world.