Trying to find peace with the mind is like trying to open a lock with a banana.

Carol came to see me with a serious agenda.  She and her husband had had a disagreement the evening before our session and Carol wanted to explain to me why her husband had said what upset her, and specifically, what in his personal psychology and history had made him decide to hurt her. She also wanted to lay out her theories on what was wrong with her husband in a more general sense and how she was going to explain it to him so that he would understand and be different.  Knowing what she knew about him, she was sure that once she laid out her case and helped him understand what was wrong with him, he would become different—and as a result, she would be okay once again.

My client had come up with an intricate, psychologically sophisticated and comprehensive narrative about her husband’s intentions, resentments, methodology, and shortcomings, and tying in his familial history, present psychology, and relational style.  Carol’s presentation was a multi-layered, multi-dimensional, and multi-generational storyline. Most developed in her narrative, interestingly, was her theory about her husband’s strategy and intention to hurt her.

Carol was suffering and I listened empathically as she constructed her clear case for why the experience with her husband had happened. And simultaneously, what she needed to do about it or explain to her husband so that he would understand why he was wrong, and would never do this kind of thing again.  I felt her pain and frustration; I also felt how her words and ideas were trying to keep her from feeling her pain, give her some protection from her heart’s hurt, make her pain manageable. And, I felt how desperately those words were failing her.

Everything Carol said made perfect sense. In court, she would have won her case.  At the same time, I have been listening to her theories on her husband for many years, and also keeping her company in her suffering, as none of her well-crafted theories and/or action plans have changed how he behaves or how she feels about it.  I’ve watched as none of her theories and action plans have brought her happiness or peace.

On this day, I felt we were ready and so I asked Carol to consider a few new questions in relation to her story and her experience. “What if none of the thoughts and intentions you’ve assigned to your husband are actually true—for him?” I asked.  And, “What if your thoughts only exist in your own mind but don’t really exist anywhere else?”  And furthermore, “What if your narrative, no matter how true and real for you, is of no value whatsoever in making you feel better?”

It was a risk to pull Carol out of her story.  At the same time, she had been telling me her theories on her husband for a long time and I trusted that she knew my re-direct was coming from a desire to help, and also that we’d given enough space and attention to the storyline of the moment, enough so that she would be willing to pull the lens back and examine the story-making itself.  I have learned from experience that asking someone to move out of their story before it’s received its due process is not useful or kind, but Carol and I were in a place to take a new turn in our journey.

In this moment, as sometimes happens, grace graced us and Carol had an awakening moment.  Her paradigm shifted and it suddenly dawned on her that what she had considered to be the truth, not just for her, but for her partner too, might not be the truth.  She saw that her narrative could make utter sense to her, could be un-challengeable, and yet could have absolutely nothing to do with what her husband was experiencing.

Her mind opened to the possibility that her idea (and certainty) as to why her husband was intentionally hurting her might be false, for him, or just an idea in her head.  In an instant, Carol literally unstuck from her most tightly held thoughts, she surrendered to the freedom of not knowing what’s true for anyone else.  Carol realized that just because she had a thought didn’t mean she had to believe it, even if it made perfect sense in her own head.

It’s revolutionary and profoundly liberating when we grasp that our version of the truth, which not coincidentally always places us at the epicenter of what’s motivating everyone else’s behavior, may not and probably is not the truth for anyone else.  Tragically, in an effort to help ourselves feel better and make sense of our pain, to know and be able to control what hurts, we construct elaborate stories on why others are doing what they’re doing to us.  We lock in a truth, one that applies to everyone and everything, and no matter how painful that truth might be, we hold onto it, believing that knowing is far safer than not knowing.

The narrative we are living and suffering however, is unreal and unnecessary.  It’s made up by our particular mind, with its particular wounds, conditioning, experiences, thoughts, and everything else we’ve ever lived.  In the end, we suffer alone, trapped in the certainty of our story, the story of what’s inside everyone else’s head—inside a pseudo-reality of our own damaging design.

It’s also remarkable to discover that our theories on why what’s happened to us has happened, and what we need to do about it, that none of them, none of our beautiful, logical works of mental art, will ultimately lead us to peace.  If peace is what we want, our mind and its theories will not take us there.  Trying to find peace with our mind is like trying to open a lock with a banana.  The mind is simply the wrong instrument if peace is what we desire.

That said, the next time you find yourself convinced of and grasping onto a storyline about how you’ve been wronged or any such thing, ask yourself, What if all my ideas on what’s true for this other person, the world, or whatever else is the protagonist of my narrative of the moment, what if they’re not actually true—for the other, not true outside my own mind?  What if my truths are only true for me?”  See if it’s possible to loosen your grip on the “big T” Truth.

Paradoxically, when we give ourselves permission to not know what’s true, to turn in our badge as master-interpreter of everyone else’s behavior, surrender our throne as judge and jury of universal truth, blessedly, we discover the very peace we believed we could only find through our storylines and certainty.

We get there when we get there, but usually, with enough mental fatigue and smart storylines under our belt; when we’ve tried long and hard enough to find peace through the mind’s gymnastics and found ourselves again and again at pain’s door, suffering within our brilliance and certainty, knowing so much but not how to be happy, we start to recognize our banana without having to shove it in the lock for too long. 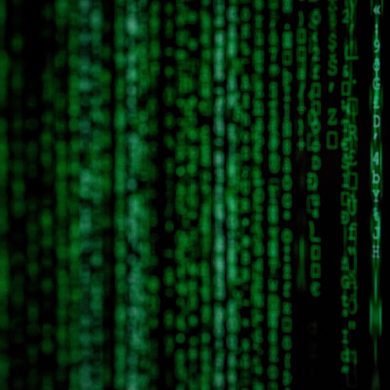 Are Algorithms Good Managers in the Gig Economy?
We use cookies on our site to give you the best experience possible. By continuing to browse the site, you agree to this use. For more information on how we use cookies, see our Privacy Policy
Continue