Six Reasons Why Your Argument Failed To Persuade

Many people think persuasion is essentially “debating lite.” To make your argument successfully, you’ve got to pick out flaws in somebody else’s way of thinking, showing them that their perspective is off-base—as long as you do it nicely.

That’s wrong. Persuasion doesn’t work this way. You might succeed at getting others to concede a point temporarily, but they’ll often revert to their old ways of thinking as soon as whatever logic or enticement you’ve used to “win” them over to your views is no longer there. Being persuasive is a lot more about emotions than cold, hard logic, and like all skills and competencies, you can get better at it with practice.

But first you need to unlearn the bad habits that make you less persuasive than you might hope—starting with these:

1. YOU TRIED TO WIN A WAR OF IDEAS

Think about the last time you argued with someone. Chances are you both got defensive, right? It’s a natural reaction. When you’re trying to be persuasive at work, you might be generating the exact same response, minus the shouting. Trying to compel other people to adopt your ideas can feel like coercion, not persuasion.

In order to get around that, you need to make the other party feel that you’re both on the same side. That doesn’t mean retreating from your ideas altogether or pretending that they don’t differ when they do. It’s more about acknowledging what you do agree on already, and how your difference of opinion starts from a shared premise.

When someone feels like they’re really being heard, they become more open to your ideas. So to create that openness, you need to avoid the common trap of thinking about how you’ll respond once somebody else is done talking. Listening is just as much a skill as argumentation, but it’s often harder to teach. One simple way to let others know that they’re being heard is simply to repeat back or paraphrase something you’ve just heard them say, then ask for clarification. This way you can delve deeper into what they’re expressing, instead of just bluntly countering their perspective with your own.

3. YOU DID HALF THE TALKING

If you’re trying to be persuasive, you’ve got to make the other person feel they’re in control of the situation, not you. It’s often said of the best listeners that they talk a lot less than other people—and that’s true of the most persuasive people as well. While the other party is speaking, listen for opportunities to connect and agree with them. See if you can get insights into their values and the reasons they think the way they do.

If you’re struggling to do that, chances are it’s because you’re yammering on too much. Keep your mouth shut more, and tune in. The more common ground you can stake out with somebody, the better your shot at persuading them. We’re all more likely to trust people who we think share our beliefs, values, and interests.

4. YOU GAVE TOO FEW (SINCERE) COMPLIMENTS

If there’s something about the person or their idea that you admire or think deserves praise, let them know. Everyone loves to receive a compliment, especially from somebody with whom they sense they might disagree about a few things. But the key here isn’t to slather it on thick and disingenuously—your compliments need to be sincere, not just seem that way.

If you can find something you genuinely appreciate about the other person and get that across candidly, they’ll be a lot more open to anything else you have to say. It also strengthens your relationship and makes them think of you more favorably. Your ability to see the positive in them elevates you in their eyes and gives more credibility to everything you say and do.

5. YOU DIDN’T LET THEM THINK IT WAS THEIR IDEA THE WHOLE TIME

This one’s tricky, and frankly it’s not always achievable. But one of the best ways to persuade others of your idea is to plant it in their minds and let them believe they came up with it. The best way to do this without being manipulative (or a professional hypnotist) is simply to make suggestions, framing your ideas as possibilities.

It’s all about leaving the other person feeling empowered enough to make their mind up themselves. Again, it’s not about trying to win a contest between two opposing points of view. Take your ego out of it and allow them to take credit for the idea. An idea that we believe we came up with—or even that we’re partly responsible for—always appeals more than one that someone else exclusively generated.

6. YOU DIDN’T SEEM CONFIDENT AND KNOWLEDGEABLE

If you aren’t confident about your views, or your grasp of the facts isn’t that solid, you can’t hope to inspire others to get behind them. We’re predisposed to put our faith in people who sound confident and appear to know what they’re talking about. If you aren’t totally convinced yourself, your hesitation will show through and undermine your credibility in others’ eyes. Even if someone is seriously considering your idea, they might back away from it if you sound unsure.

So while you should work on projecting confidence, you’ve also got to deepen your knowledge base enough to actually feel confident for good reason—do your homework, this way you won’t have to fake it.

Becoming more persuasive is really just about brushing up on the soft skills that get us ahead in lots of situations, not just when we’re trying to persuade people: the ones associated with listening, relating to others, and finding common ground to connect. Persuasiveness really can’t be forced, but by weeding out these common bad habits, you’ll be well on your way of getting to “yes” more easily and more often. 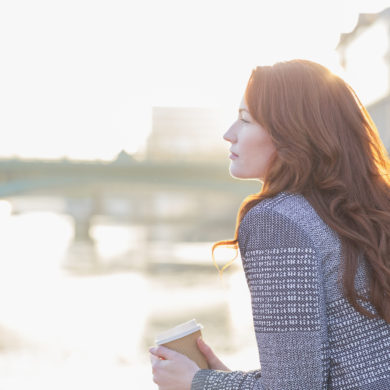 Amid Uncertainty, Beware Indecision And Over Caution
We use cookies on our site to give you the best experience possible. By continuing to browse the site, you agree to this use. For more information on how we use cookies, see our Privacy Policy
Continue