Who Are You Really Mad At?

A man and two children, a boy about nine and a girl about seven, were walking ahead of me in silence. The boy looked up and said something to his father. Whatever he said set off his father who started yelling at the boy. I could see the boy’s pain as his father’s words hit him. It was heartbreaking.

What happened next took me by surprise, but shouldn’t have: As soon as his father stopped yelling at him, the boy turned to his little sister and hit her.

As I thought about that boy, I realized how often I — and so many people I know — do a version of the same thing. We say or do something to someone when, really, it’s meant for someone else.

Sometimes it’s as obvious as it was with the boy. Perhaps you know a manager who, after being yelled at by his boss, turns around and yells at his employees.

But often it’s far more subtle. After seeing that boy hit his sister, I began to watch myself more closely. What do I direct at one person that’s meant for another?

It’s hard to see that kind of behavior in yourself. At first, I didn’t notice anything. But I kept looking. I even spent a couple of days trying to talk less, just noticing my urge to talk and then examining where the urge came from. Was I speaking to the right person?

A pattern began to emerge, one I’m embarrassed about but that became hard to ignore: I do and say things specifically to impress people, even people I don’t know.

As I tossed that thought around for a while, one person kept coming to mind: my mother.

As a kid, like most kids, I wanted to please her. But we grow out of that as we become adults, right?

Apparently not me. I try to show people that I’m succeeding — even by bragging or showing off — because, somewhere in the complicated recesses of my mind, I believe it will deepen my mother’s love for me. In other words, I try to get other people to notice the things that are important to my mother.

It’s crazy, I know. But so is hitting your sister because you’re angry at your father. It might be crazy but it’s what we do.

But we don’t have to. Simply recognizing the absurdity of the dynamic has helped immensely.

I now care less what other people think and more about what things feel like to me. I’m calmer. Less needy of praise. I speak and act more deliberately. The immensity of the change has been startling to me.

Still, I have a long way to go. So far, though, the path of this change has been surprisingly straightforward:

If you feel angry at an employee, try not to express that anger immediately and see what’s behind what you feel. Where is that anger coming from? If you feel intimidated by a colleague, pause before walking away silently and ask yourself why you’re intimidated. Is that colleague dangerous? Or does he remind you of someone who isn’t even there?

I’m not advocating repression. Don’t pretend you aren’t angry or intimidated — that won’t help and it will surely come out sideways. Instead, ask yourself why you feel angry or intimidated. Sure, the answer might be that your employee is an idiot or your colleague is a bully. But often, when you look more deeply, you’ll discover someone else standing in front of you.

That discovery is freedom. It releases you from your instinctive action and allows you to choose better responses that will lead to more productive relationships.

This morning, I woke up anxious. I sat at my desk with a long list of things I wanted to accomplish and felt behind before I even started. My stress grew; how could I have put myself in this situation? Then Daniel, my five year old, came in to the room and I immediately felt annoyed. I had the urge to tell him not to disturb me.

Before reacting though, I remembered that man who yelled at his boy who then hit his sister. I didn’t want to continue the chain. I wasn’t annoyed at Daniel, I was annoyed at myself. I took a deep breath, turned in my chair and smiled. Chain broken.

My reward? A hug, a smile, and the sweetest little kiss you can imagine. 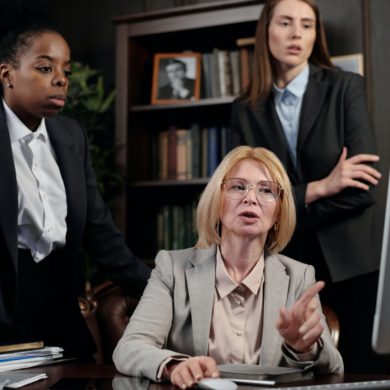 17 Phrases Great Leaders Never Say to Employees
We use cookies on our site to give you the best experience possible. By continuing to browse the site, you agree to this use. For more information on how we use cookies, see our Privacy Policy
Continue