To sell yourself effectively, believing in what you have to offer is essential.

By Marshall Goldsmith
In Women at Work
16 min read

by Sally Helgesen and Marshall Goldsmith

Over the years, Sally has conducted in-depth interviews with countless women leaders. Several years ago, she spent days interviewing senior female partners in accounting, law, consulting, and investment firms. She was interested in learning what they believed had been most responsible for their success, and particularly eager to get their thoughts about how younger women in their firms might better position themselves to become partners.

The responses to her questions ran a wide gamut, but in two areas were remarkably consistent. When asked about the greatest strength of the younger women in their firms, the female partners almost unanimously cited their ability to deliver high-quality work. “The women here go the extra mile when you give them assignments,” said one partner. Said another, “They are extremely conscientious, crossing every t and dotting every i. They take deadlines seriously. They show up. They are meticulous. You can count on them to get the job done.”

When asked what the younger women in their firms were worst at, the responses were also consistent. “Hands down, they are worst at bringing attention and visibility to their successes.” “They often work harder than their male peers but then go out of their way to avoid taking credit for what they’ve done, especially with senior leaders.” “A lot of our women seem uncomfortable using the ‘I’ word, so they always try to spread the credit around. This might make them good people but it doesn’t help their careers.”

These observations were all made about associates in partnership firms, such as law, accounting, consulting, and investment banking. But reluctance to claim achievements is common among women in every sector and at every level. When delivering workshops to high-potential younger workers and women leaders, Sally often makes reference to her partnership survey and asks, “How many of you are good at drawing attention to what you achieve?” Usually, only scattered hands go up. Sometimes, not a single woman describes herself this way. 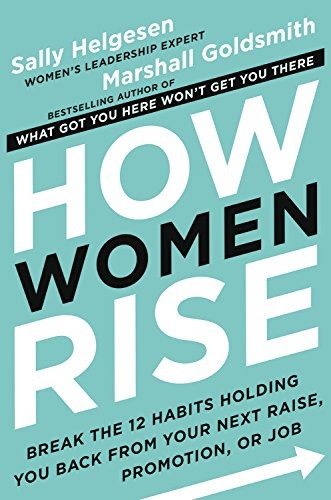 When asked to reflect on why they struggle with claiming their achievements, answers vary. But two responses surface nearly every time:

“If I have to act like that obnoxious blowhard down the hall to get noticed around here, I’d prefer to be ignored. I have no desire to behave like that jerk.”

“I believe great work speaks for itself. If I do an outstanding job, people should notice.”

Let’s unpack the “obnoxious blowhard” answer. It’s quite common. A woman will pick out the most shameless self-promoter in the organization and decide that, if she tries to draw attention to what she’s doing, she will be acting like him. (It’s usually a him.) Since the thought of emulating this insufferable colleague’s behavior repels her, she prefers to keep her head down instead of looking for ways to get recognized for her contributions.

There are two problems with this approach.

First, citing the jerk down the hall as an example of everything you are not and don’t wish to become indicates an either/or way of thinking. Either you exemplify the worst aspects of a given behavior, or you behave in an entirely opposite manner. Either/or thinking sees no possibility of a middle ground, no graceful way, for example, to bring attention to the quality of your work without becoming obnoxious and self-serving, and so justifies your refusal to do so. Either/or is a common trap and a pitfall you will benefit from avoiding.

Second, contrasting your refusal to claim credit for your own good work with an extreme opposite example can inspire you to feel morally superior to anyone who is comfortable doing so. This is unhelpful, because it gives you an excuse for buying into what is ultimately a rationale for staying in your comfort zone. Instead of asking yourself why you have trouble bringing attention to your successes and then figuring out an appropriate way to do so, you congratulate yourself for being a wonderful human being who doesn’t need to toot her own horn. And then you try to take solace in that when you’re passed over for the next promotion.

Marshall notes that people generally tailor their behavior to meet the expectations of their “referent group.” It’s a phrase he picked up from the late great diversity pioneer Roosevelt Thomas. Basically it means that people act the way the group they identify with expects them to act. If you feel uncomfortable drawing attention to your achievements, it’s often because your referent group—other women, a former boss, a repressive culture, your family of origin—expects you to be modest and self-effacing.

As a result, you tend to view behaviors that don’t meet these expectations as disruptive. And you avoid them even in professional situations where they are expected. But think about it. If women in the seventies, eighties, and nineties had been universally concerned with meeting the expectations of their referent group, there would be about zero women in management ranks today. Moving ahead—rising—requires bold action. So while there’s nothing to gain from being obnoxious, shrinking into yourself in an effort to please isn’t going to benefit you—or other women.

The Art of Self-Promotion

If you struggle to claim credit for your achievements, it may cost you throughout your career. But the costs will be highest when you’re trying to move to the next level or seeking a new job. Speaking up about what you contribute and detailing why you’re qualified does not make you self-centered or self-serving. It sends a signal that you’re ready to rise.

Search firms confirm that women applying for jobs are often less assertive than men when it comes to declaring their qualifications. Fern, a partner in a firm that places health care professionals, says, “We find women are often tentative when describing their skills and experience. It’s not uncommon to come across comments in application letters such as, ‘I’ve never held a position like this before so I’m not sure if my qualifications are an exact match.’ ”

A less qualified man will often be bolder, Fern reports. “A guy might say, ‘I have exactly the skills you are looking for and can easily meet these requirements because I’m excellent at X, Y, and Z.’ Maybe X, Y, and Z have nothing to do with the job, but his confidence somehow manages to convince you. Whereas women are more likely to express doubt. All too often, this results in the job going to the less qualified man. Since he so firmly believes he can do the job, the employer is willing to give him a chance. Of course, sometimes sexism is at work, but often the woman is just too hesitant in making the case that she’s ready. When that happens, it’s very discouraging.”

Effectively marketing yourself, far from being shameful, is an important part of every job—and key to helping you reach the next level of success. If you want to reach your highest potential, making your achievements visible, especially to those at senior levels, is as important as the actual tasks spelled out in your job description.

If you’re considering how you might promote yourself, it helps to bear in mind that you are your primary product. As you talk about what you have achieved, you are always selling you—not just the details but the overall package. Every successful salesperson knows this. People buy because they like and trust you. And because they believe what you offer may have value for them. Why do they believe this? Because you so obviously do! Mesmerizing belief is the secret of every great salesperson.

To sell yourself effectively, therefore, believing in what you have to offer is essential. If Coke is doing a marketing campaign, they don’t say, “Well, some people prefer Pepsi. Or, it’s possible that, if you give Coke a try, you might like it.” No. Their job is to talk about how great Coke is. Not to hedge, but to come out and tell the world, “We’ve got a fantastic product.”

If this sort of declaration makes you uncomfortable, it may help to think in terms of why it matters that you get ahead. What ultimately motivates you in your quest? If simply reaching the top of the hierarchical peak isn’t enough, maybe something else gets your juices flowing.

Maybe you believe that your having more power in the organization would be great for your wonderful clients. Maybe you think that your organization could benefit from having someone with your emotional IQ at the top. Maybe you’re convinced that you would be a good leader—or at least better than the bullying colleague who’s angling for the job you want. Maybe you think your company would benefit if more women held high positions. Maybe you want to inspire your kids or give your parents something to feel great about.

Please note: these are not self-serving reasons. But they may be reasons that motivate you. If so, keep them in mind the next time you feel tempted to deflect credit for your achievements, or say “it was nothing” or “anybody could have done what I did.” The world can benefit from your success.

What else can help? Exposing the fallacy of either/or thinking could be a start. So you think you are either a shameless self-promoter or a self-effacing martyr beavering away at her job? No, there’s a lot of ground in between these polar opposites. You can simply be a talented person bent on speaking up for herself. Look for the nuance in situations, and find a middle ground between “shrinking violet” and “shrill self-publicist” that feels right to you.

And if you still think of effectively marketing yourself as cheesy or beneath you, you might try looking at it through an upside-down lens. For example, Marshall has observed that men sometimes mistrust women who are averse to claiming their achievements. They view such women as inauthentic, falsely humble, or lacking in commitment. So why would you let your behavior support such negative perceptions?

If claiming your achievements feels like a new behavior for you, you might want to try enlisting a colleague to help you. You might start by simply asking a peer who worked with you on a successful venture to speak a bit on your behalf the next time you’re in a meeting. It might not be boldly taking the initiative yourself, but it will be a step.

Just refrain from contradicting what they have to say.

10 Ways to Get Your Point Across Persuasively
We use cookies on our site to give you the best experience possible. By continuing to browse the site, you agree to this use. For more information on how we use cookies, see our Privacy Policy
Continue